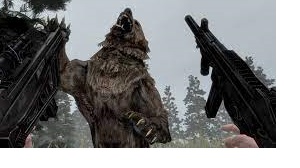 Fallout 4 has some interesting weapons as part of its base game. They wear their World War 2 and Cold War influences with pride and really bring out the look and feel of the unique setting the series is known for. Of course, it would be a massive missed opportunity to avoid modding a Bethesda title with things that don’t even look like they’re from the base game.

We’ve looked at quite a few Fallout 4 Weapon Mods already, both Halo mods and some excellent weapon mods in general which you should really take a look at. Of course, you can always change more. Here, we’ll be looking at turning Fallout 4 into a modern battlefield in two ways using some Fallout 4 Weapon Mods.

These mods essentially do the same thing with different weapons. They alter the game’s “levelled lists”, essentially the spawn table, to let your enemies spawn with weapons from the modern day. You can expect M4A1s, FN FALs and weapons from the AK-family. Modern sights made popular in Call of Duty and Battlefield are naturally included.

The first mod is the aptly named Modern Firearms mod. It’s a massive overhaul that quickly and conveniently changes Fallout 4’s combat into something much closer to a realistic modern shooter like Squad or even ARMA 3. It replaces all of the vanilla game’s original weapons and expands on it with an extensive arsenal of weapons from the real world, creating a staggeringly diverse variety of weapons that far exceeds Fallout 4’s weapons.

Modern Firearms even adds weapons that aren’t commonly portrayed in the media. The mod’s website lists weapons like the R.O.C. Kinmen Defense Command Type-65, a weapon manufactured in Taiwan as well as the Barrett REC7, a heavily modified M4 carbine.

This same variety extends to the ammunition selected by the weapons. Each one is chambered for a specific kind of ammo used by the weapon in reality. Common types like the 5.56mm NATO round are readily available with most weapons being chambered for it. More specific types, such as .338 Lapua might be familiar with gun nuts but aren’t commonly mentioned in other games. This system feels really overwhelming at first but really adds a layer of challenge when considering which weapons to bring along based on ammo availability.

Part of this challenge can be mitigated with the mod’s extensive customisation system which is easily one of the most impressive among Fallout 4 Modern Weapons Mods. Each weapon can be modified almost as extensively as in real life from the barrel length to the round it chambers, changing the way the weapon handles and letting you use the ammo that you want. Of course, you can get optics and underbarrel attachments which is where this mod gets truly interesting.

Modern Weapons have variable-zoom scopes which allow the Sole Survivor to either look through a reflex sight for close range firefights or through a scope for longer range shooting. The mod even has functioning underbarrel grenade launchers which work as expected and are incredibly fun to use.

The mod even changes gameplay by jacking up the damage dealt by its weapons, letting the player die in an instant if they’re not careful. This makes the game incredibly tense, especially when carefully clearing the bombed-out buildings of the Commonwealth.

Unfortunately, the sweeping changes make Modern Firearms hard to use alongside any other Fallout 4 Weapon Mods because of the vastly different damage numbers. Similarly, armour mods aren’t very protective, if you were using them for anything other than aesthetic purposes.

Modern Weapons Replacer doesn’t add any content on its own. Instead, this mod acts as a framework to allow the myriad Fallout 4 Modern Weapons mods on the Nexus to replace each vanilla weapon such as the Assault Rifle and 10mm pistol.

The way this mod impacts the game is heavily dependent on which mods you use to replace each weapon. Unlike Modern Firearms, this mod doesn’t increase variety past vanilla weapons which leads to a much more focused variety. Still you are in complete control over what gets replaced which can lead to some interesting results. It’s possible to override laser weapons in favour of more ballistics and it’s even possible to replace all laser weapons with M4A1s.

The advantage of using Fallout 4 Weapons mods as replacers is that each weapon mod is incredibly detailed and often comes with their own custom animations and sounds, letting the mod bring over weapons that look better than their Modern Firearms counterparts.

Unfortunately, installing the mod is quite time consuming and is a serious drawback for the mod. One of the stickied posts on the Nexus page includes a spreadsheet to help you plan, though it was still a challenging process.

Final thoughts on these Fallout 4 Modern Weapons Mods
These two mods are great ways to spice up your next playthrough, though they can be a little troublesome to get going. Modern Firearms is easier to get going at the start but makes sweeping changes to the game. Modern Weapons Replacer is less intrusive and is completely customisable but is challenging to install.

Also, be sure to check out:
1. 5 Reasons Why Xbox Game Pass is Worth It
2. 5 Roblox Anime Games to Get Lost In
3. MHW Silver Rathalos Guide: How to Find and Defeat the Monster