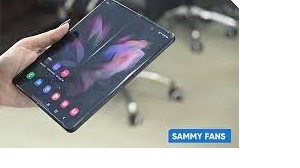 Already a host of smartphones in Samsung’s portfolio, are running the latest Android 12 One UI 4.0 update. Now, the Android 12 update is arriving for the unlocked Galaxy Z Fold 3 and Z Flip 3 in the US.

Notably, the update was previously live only for the carrier-locked units of the Samsung Galaxy Z Fold 3 and Z Flip 3. Thankfully, Samsung is pushing the update for the unlocked variants as well.

Along with all the new features of Android 12 and One UI 4.0, Samsung has bundled this update with the latest January 2022 security patch as well.

It makes the Galaxy Z Fold 3 and Z Flip 3 one of the first devices, if not the first ones, to pick up the latest January 2022 security patch. The January patch brings fixes for dozens of security and privacy-related vulnerabilities.

So, this update is not only important feature-wise because of Android 12 and One UI 4.0, it is also very crucial as it bumps the security patch level to January 1, 2022.

For more information about the latest security patch, you can check out the Samsung Security Bulletin.

Android 12 update for the Galaxy Z Flip 3 carries firmware version F711U1UES2BUL9
Coming back to the Android 12 update, it brings tons of new features for both devices. For instance, there is the new Material You design language, dynamic color support, privacy dashboard, extra dim feature for brightness, new widgets, etc.

Along with this, you also get One UI 4.0-based features such as homescreen widgets redesign, camera UI changes, improved multitasking, a new share menu, new charge animations, and much more.

As usual, the update is rolling out via OTA in batches. Meaning they won’t be live for either of the Galaxy devices right away. Thankfully, you can manually check for the update.

In order to do so, you need to head over to Settings > Software update and hit the Download and install button. Your device will check for updates on its official servers, and if it detects one, the device will prompt you to download the update.

Both phones were introduced last year, and they came with Android 11 out of the box. So, this Android 12 update is the first firmware update for both units.