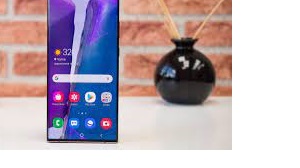 While Samsung is working in full swing to push the Android 12 One UI 4.0 update to its unlocked/international devices, carrier models are lagging behind.

It is safe to say that the software update support for the unlocked models is always better than that of the carrier-locked models of Samsung Galaxy devices.

Thankfully, carrier networks are now catching up. Because according to a new report by PhoneArena, several users on Reddit and the T-Mobile community portal have confirmed that they have bagged the Android 12 One UI 4.0 update on their T-Mobile carrier-locked Galaxy Note 20 series devices.

Yes! If you own the Samsung Galaxy Note 20 or the Note 20 Ultra T-Mobile carrier-locked models, then you are in for a treat. However, their respective T-Mobile support pages do not mention the roll-out of the Android 12 update.

The new update brings all the goodies of Android 12 along with One UI 4.0-specific features for the Galaxy Note 20 series.

There is no information if this Android 12 update packs in the latest security patch or not
There is no clarity at the moment if the update bumps the security patch to January 2022 or not. Talking about the update, Android 12 features such as Material You design, dynamic theming, rounded UI elements, new widgets, enhanced privacy and security, are a part of it.

The extra time taken by T-Mobile developers for pushing this Android 12 update means that it won’t be live for everyone simultaneously. The nationwide expansion may take a few days and may reach all devices by the end of this week.

So, we would advise all the T-Mobile Galaxy Note 20 owners to keep checking the software update section on their devices. You can manually check for the update by heading over to Settings > Software update and hitting the Download and install button.

Your device will then look for the update over the network’s server and if it detects one, all you need to do is hit the Download button to begin updating your phone.

We would recommend you download this update over stable mobile data or Wi-Fi network to avoid any issues while downloading the update.

To recall, Samsung released the Galaxy Note 20 series back in 2020. Both devices came with Android 10 out of the box. However, later the devices bagged their first firmware update in the form of Android 11.