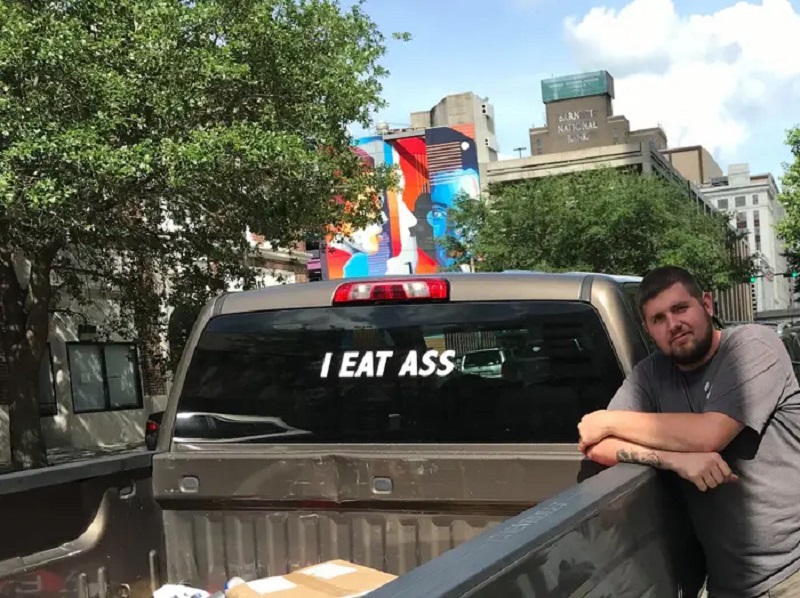 The ability to be a proxy offended affords officers the opportunity to literally police speech. They’re almost never in the right when they do this. But they almost always get away with it. That’s why a Texas sheriff felt comfortable charging a person sporting a “FUCK TRUMP” window decal with disorderly conduct. That’s why a Tennessee cop issued a citation for a stick-figures-in-mid-coitus “Making my family” window decal.

And that’s why a Florida law enforcement officer pulled over and arrested a man for the “I EAT ASS” sticker on his window. According to Deputy Travis English’s arrest report, he noticed the sticker and assumed it violated the state’s obscenity law. He was, of course, wrong about this. But he called his supervisor for clarification and was assured (wrongly) that this sticker violated the law.

He offered to let the driver, Dillon Webb, be on his way if he removed the word “ASS” from the decal. Webb refused, (correctly) asserting his First Amendment right to publicize his non-driving activities. English’s report is full of dumb things (and, ironically, some incorrect English). Here’s what he had to say about the stop and the driver’s assertion of his Constitutional rights. (All errors in the original.)

While speaking with the occupants and informing Dillon of the reason for the traffic stop, Dillon became defensive about the sticker on his truck and stated: “Their just words.” I then asked Dillon how a parent of a small child would explain the meaning of the words “I EAT ASS”. Dillon then told me that would be up to the parent.

Dillion was then transported to the Columbia County Detention facility without incident where he was charged with Obscene writing on vehicles and resisting an Officer without violence.

One count of Obscene writing. And one count of Contempt of Cop, as expressed in the form of advocating for one’s own rights. Here’s what awaited Dillon following his arrest:

Among other things, Officer Dampier performed a thorough pat-down search of Webb and was present when Webb was required to strip naked and put on the clothes provided by the Jail.

CCSO Officers placed Webb in a cell while his mother worked with a bail bondsman to secure his release. Although the exact length of time Webb spent in the Jail is in dispute, suffice it to say Webb was incarcerated for more than an hour. Webb paid approximately $225.00 to retrieve his truck from the tow company, $250.00 to the bail bondsman, and a $15.00 Jail fee.

That’s from the decision [PDF] issued by a Florida federal court, which unfortunately allows these officers to exit the lawsuit early because it wasn’t clearly established that misreading a state statute to support a stop, search, arrest, vehicle seizure, temporary jailing (following another search), and the issuance of criminal charges was the wrong thing to do when confronted by an “I EAT ASS” decal. (via Volokh Conspiracy, h/t Andrew Fleischmann)

The court says qualified immunity applies because it’s not immediately clear an “I EAT ASS” decal is protected speech, at least not under Florida law. Even if the officers were incorrect in their reading of the law, they’re shielded from further litigation because they both subjectively believed the decal violated the law.

As an initial matter, it is undisputed that Deputy English and Corporal Kirby subjectively interpreted the Sticker as depicting a sexual act and believed that the Sticker violated Florida’s obscenity statute. While Webb denies the Sticker was in fact obscene, in interviews he repeatedly acknowledged the sexual nature of his Sticker, albeit couched as an attempt at humor, showing that the notion that an erotic message was more than hypothetical—it could reasonably be viewed as the predominant message being communicated. Indeed, others in the videos similarly acknowledged, both directly and indirectly, that the Sticker described a sexual act. Given this evidence, including Webb’s own statements, it is beyond dispute that reasonable officers possessing the same knowledge as Deputy English and Corporal Kirby could have thought the Sticker depicted a sexual act, and as such arguably violated Florida Statute section 847.011(2).

The speech might have been protected, even given its “sexual nature,” if it contained any “serious artistic, literary, political, or scientific value.” The judge says this sticker doesn’t, or, if it does, it was not immediately apparent to Deputy English and his direct supervisor.

Here, Deputy English and Corporal Kirby’s determination that the Sticker lacked serious value under Florida law was not inherently unreasonable under the circumstances. As such, the Court finds reasonable officers in the same circumstances and with the same knowledge as Deputy English and Corporal Kirby could believe Webb’s Sticker was obscene, making it an arrestable offense under Florida law.

Using that logic, the court waves away his challenge of the resisting arrest charge.

Because the Court finds Webb’s arrest was arguably justified under Florida’s obscenity law, the Court need not separately address his arrest for resisting without violence.

So, even if the first charge may have been a misreading of the law, Dillon’s “resistance” (which was little more than refusing to alter the sticker and stating he had a First Amendment right to display it — and that’s according to the Deputy’s arrest report), the second charge can’t be challenged because… one of the charges was close enough to lawful to make everything lawful? Maybe it’s more nuanced than that, but if it is, the court didn’t feel like sharing its thought process. That additional charge is accepted in whole because the obscenity charge was close enough to legit to justify the arrest.

Here, in evaluating the applicability of the doctrine of qualified immunity, the Court need not determine whether genuine issues of fact exist as to the question of whether Deputy English and Corporal Kirby violated Webb’s right to be free from First Amendment retaliation because the constitutional rights Webb alleges the Defendants violated were not clearly established at the time of his arrest.

Since the court is unwilling to make any determination on the applicability of the law to the speech in question, the question remains open. And an open question is just more unsettled law — the sort of thing that allows officers to violate rights and avoid facing the consequences because the qualified immunity doctrine not only short-circuits civil rights lawsuits, it almost always preempts any legal discussion of the government’s alleged rights violations. Going forward, Florida law enforcement remain free to misread laws involving possibly-protected speech to punish people for words they subjectively find offensive.