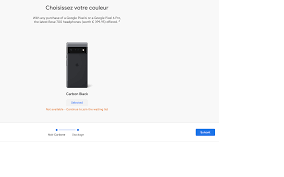 Google now offers a waitlist for Pixel 6 models that are out of stock. The company’s Pixel 6 series launch didn’t exactly go as smoothly as Google hoped. We’re not talking about the event, but about the pre-orders that followed.

Many users were unable to access the Google Store in a number of regions, but the US store has seen the most problems. Some Pixel 6 variants were sold out rather quickly, mostly different options for the ‘Pro’ model.

The Pixel 6 and 6 Pro availability varies from one region to the next. The Pixel 6 variants are easier to come by than the ‘Pro’ models. Cloudy White and Sorta Sunny variants seem to be in high demand in some regions.

Google likely ordered the most Stormy Black models, so those are still available in most regions, at least as far as the Pixel 6 is concerned. The situation keeps on changing, though.

The Pixel 6 starts at $599 in the US, while the Pixel 6 Pro starts at $899. Pricing in other regions is different, both devices are more expensive elsewhere, though that was to be expected.

We’ve released a ton of Pixel 6 content on the site thus far, ranging from Pixel 6 and 6 Pro specs, to a hands-on article. We’re working on both the Pixel 6 and 6 Pro reviews, so you can expect those in the near future as well.