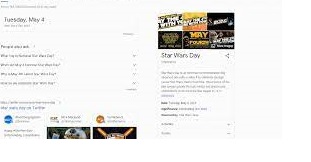 Of course, this is not the first time that Google is doing such a thing, and they did a similar act last year. Star Wars has lots of fans around the world, and Google tries to make Star Wars Day more enchanting to them.

The ‘‘May the Fourth’’ homescreen row now appears on the Chromecast with Google TV and some TCL TVs. As you can see in the screenshot, a “May 4 Be With You” row has appeared, saying, “Celebrate Star Wars Day by exploring a galaxy far, far away.”

Google has done its best to provide some of the most popular tiles for Star Wars fans. However, maybe some fans also expected to see the “Clone Wars” series. On May 4, you can find so much great Star Wars content on Google TV’s featured grid.