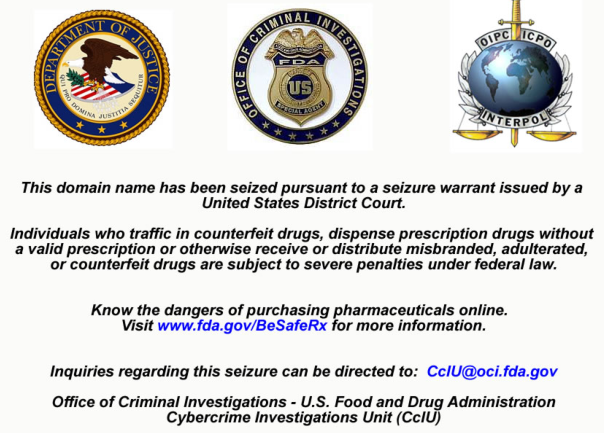 Just as with last time Homeland Security’s Immigrations & Customs Enforcement (ICE) group seized a bunch of domain names, the deeper you look into what sites were targeted, the more questions are raised about how ICE seems to interpret the law in its own unique manner. Lots of people do this, but usually they’re not the federal government with the ability to simply seize property with no adversarial hearing and no concern for either due process or the First Amendment.

For example, it appears that a bunch of the domains seized this week were focused on sports streaming. Of course, this all seemed to come down on Super Bowl week, so we’re almost surprised that ICE didn’t announce the seizures from the NFL’s headquarters, like they did at Disney’s headquarters last summer. Among the other sites seized (beyond the ones we mentioned yesterday) are Channelsurfing.net, Firstrow.net, Atdhe.net and Ilemi.com. At this point, we’ve now seen Homeland Security seize .com, .org and .net domain names.

I’ll be looking into more detail on all of these sites (many of which have already set up shop under different domain names) to get a better understanding, but after my initial review of Channelsurfing.net, a Swedish site, there are really serious questions raised. That’s because Channelsurfing — a site based in Sweden — does not appear to host any content, nor link to any downloadable content. Instead, it was built entirely of embeds of streaming video offerings from elsewhere on the internet (and the site was known to obey takedown requests). Nearly four years ago, we questioned whether merely embedding videos could be copyright infringement.

While we haven’t yet seen the affidavit ICE used this time around, if the affidavit used last time is any indication, ICE agents claim that these sites are involved in direct infringement of copyright for criminal purposes. We’ve already noted that there is no such thing as criminal contributory infringement right now, so “direct” infringement is the only real option for ICE.

And that’s a big problem for ICE.

That’s because embedding a video from another site is almost certainly not direct infringement. The case that gets the most attention on this is Perfect 10 v. Google in the 9th Circuit, which discussed Google’s in-line linking of images hosted elsewhere. As the court ruled:

Google does not, however, display a copy of full-size infringing photographic images for purposes of the Copyright Act when Google frames in-line linked images that appear on a user’s computer screen. Because Google’s computers do not store the photographic images, Google does not have a copy of the images for purposes of the Copyright Act. In other words, Google does not have any “material objects… in which a work is fixed… and from which the work can be perceived, reproduced, or otherwise communicated” and thus cannot communicate a copy.

As the Citizen Media Law Project at Harvard notes on this issue:

Now, a few caveats on this. This ruling still only really matters in the 9th Circuit, and it’s doubtful that the domain seizures ran through the 9th Circuit. However, this ruling has been relied on elsewhere, so it’s a bit presumptuous to assume that it absolutely does not apply elsewhere. There are also separate questions about whether or not knowingly including infringing embeds changes the equation, but the point is it’s certainly not a black-and-white legal question. That’s why little things like due process and adversarial hearings on these things matter. The law is anything but clear cut on this particular issue, and seizing a domain name without even letting a court hear the arguments on the other side is immensely troubling. That Homeland Security has continued to do this despite the serious questions raised about their last round of seizures suggests it’s an organization that is not interested in the rule of law, due process or the First Amendment at all, but is on some sort of odd quixotic quest to please entertainment industry partners. This is not how our government is supposed to act.