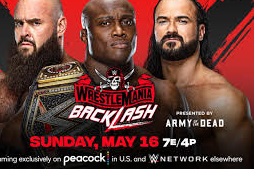 Once again, the WWE has split Wrestlemania 38 into two nights. So it’ll take place on Saturday, April 2 and Sunday, April 3. It’s expected to be around three to four hours each night. Which makes Wrestlemania a lot easier to watch, then having it start at 6PM and last until almost 1AM, like it has in the past. It’s something that many fans hope WWE continues to do in the future.

Wrestlemania 38 will be taking place at AT&T Stadium in Arlington, Texas. It will be full capacity, as many of WWE’s shows have been since last summer. AT&T Stadium held Wrestlemania 32 in 2016, which had over 100,000 people attend. And it’s likely going to be the same thing this year, but doubled since there’s two nights.

That is much better than having a single seven hour long Wrestlemania, as we had before COVID.

And with Smackdown happening on Friday night and Raw on Monday, that’s four straight days of wrestling. Which is a dream for any wrestling fan out there. This Friday’s edition of Smackdown is being called “Wrestlemania Smackdown” and there are some Wrestlemania matches happening on Smackdown this Friday. Like the Andre the Giant Memorial Battle Royal. Following Smackdown, is the Hall of Fame ceremony that will see The Undertaker go into the hall of fame in his home state of Texas (he’s from Houston, not Dallas).

Wrestlemania 38 match card
As always, the card is subject to change. And since this is a two-day event, it’s possible that matches could be moved from one day to the other. However these are the announced matches and days for each match.

Rumored matches
Seth “Freaking” Rollins will have a match at Wrestlemania 38, after meeting with the company’s Chairman of the Board, Vince McMahon at headquarters. However, we do not know his opponent or which day he will have his match. Considering how light the card is for day 2, we expect it to be on Sunday. There’s also plenty of rumors of Rollins facing a returning Cody Rhodes at Wrestlemania. WWE themselves have been hinting at it too. Rhodes was one of the founding members of AEW and then decided not to renew his contract with AEW and left in February. Reportedly, he signed with WWE three weeks ago, but has not really shown up on WWE TV just yet. WWE is likely looking to use this as a massive surprise at the event itself. A founding member of a competing company, jumping ship to WWE is a big deal, giving Monday Night Wars from the ’90s vibes.

Another rumors match is Finn Balor (c) vs Damian Priest for the United States Championship. As of this writing, following the Wrestlemania Raw on March 28, that match has not been made official. There is still a chance that something happens at Smackdown on Friday, or some kind of backstage angle at Wrestlemania this weekend to make this match actually take place. But as of right now, it’s not happening.

How to watch Wrestlemania 38
For the first time every, Wrestlemania will be streaming, and not on the WWE Network. At least in the US. The WWE and NBCUniversal entered into a deal to make Peacock the new home for WWE content, and that includes Wrestlemania 38. So if you want to watch the event, you’ll need to subscribe to Peacock.

You will need to subscribe to Peacock Premium, which is $5 per month. If you sign up before April 3 at this link and use the promo code WM8ANNUAL you can get a full year of Peacock Premium for $3.80/month or Peacock Premium Plus for $8.80/month. That’s 25% off the regular price.

Then you’ll need to input your information for paying for Peacock. Don’t worry, you won’t be charged until after your seven-day free trial is up.

Then you’re all set.

You will be asked to select a few shows to help Peacock tailor its recommendations to your liking. But you can now start streaming your favorite shows and movies.