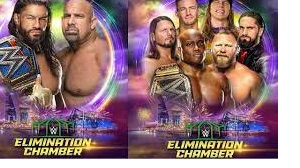 The road to Wrestlemania continues, this time taking the WWE all the way to Saudi Arabia. This will be the first time that the Elimination Chamber is used outside of the US. This is one of two shows that the WWE will hold in Saudi Arabia. The other is typically called Crown Jewel and takes place in October, typically in Riyadh as well.

Because this is a Saudi Arabia show, we’re seeing a lot of legends returning for this event. That includes Goldberg and Lita. Goldberg always surfaces for the Saudi Arabia shows, and this time he is challenging the Universal Champion Roman Reigns, from Smackdown. Goldberg could end Reigns’ record-setting Universal Championship reign, which is well over 500 days right now. Reigns has seemingly defeated everyone else on the roster during his run. However, there is some unfinished business with Brock Lesnar, who will be in the WWE Championship Elimination Chamber match.

Brock Lesnar lost his WWE Championship at the Royal Rumble last month, after Paul Heyman double-crossed him, and went back to Reigns’ side. But he is also in the Elimination Chamber for the WWE Championship in Riyadh. Which means that if he wins, we could see him face Roman Reigns at Wrestlemania in April and become a double-champion. As he did win the Royal Rumble, and has already decided he wants Reigns at Mania. Which could set things up for a pretty impressive main event in Texas.

Wrestlemania is a two-day event once again, so we could see Lesnar defend the WWE Championship on the first day, and win the Universal Championship on day two. With ticket sales as bad as they are for Wrestlemania right now, that is definitely a real possibility.

How to watch WWE Elimination Chamber 2022 on Peacock
First up, make sure to login to your Peacock account. Or sign up if you haven’t already.

Then click on the “WWE” tab at the top of the page. It’ll be to the right of “Sports”.

Now, keep in mind, that Fastlane doesn’t start until 12 PM EDT on Saturday, February 19. So if you go to that page before that time, you will see a brief synopsis about the event, and a button to add it to your watchlist. Once it starts on Sunday, you’ll be able to watch it with no problem.

Because of this, the main show will start at 12PM EDT this time around. It should be over around 3PM or 4PM EDT. This depends on how long the Elimination Chamber matches last.

You’ll notice that on Peacock it does say it starts at 11AM EDT. That’s with the Elimination Chamber pre-show. WWE does an hour-long pre-show for every PPV to get you ready. The bigger PPVs like Wrestlemania and Summerslam, see longer pre-shows. There is some action on the pre-show, but generally just one match towards the end of that hour.

As always, the card is subject to change due to injuries, time slots, etc. And where this is being written before the final Smackdown before the event, there could be changes to the card, including an additional match or two being added. We’ll be sure to update this post accordingly so you have the most up-to-date information.