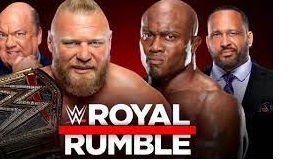 WWE is apparently pulling out all of the stops for the Royal Rumble this year. Even announcing a lot of the entrants to the Royal Rumble ahead of time, which is likely to help boost ticket sales. Since the Royal Rumble is taking place at the America Center in St. Louis, which is a 67,000 seat dome, they have a lot of tickets to sell. Speaking of which, if you have not gotten tickets yet, you can still get some from TicketMaster.

The Royal Rumble has basically, all must-see matches this time around. The dream match between Brock Lesnar and Bobby Lashley, the Shield brothers Roman Reigns and Seth Rollins going at it, and Mickey James entering the Women’s Royal Rumble as the Impact Knockouts champion. Not to mention, we’ll see Beth Phoenix back in the ring for the first time in 10 years, tagging with her husband and fellow hall-of-famer, Edge to take on Miz and his wife Maryse.

It’s bound to be a really good PPV, and we could still see some surprises. And most importantly, this PPV starts the Road to Wrestlemania, which is in Dallas this year.

With the WWE, especially with Royal Rumble PPV’s it’s always tough to tell what the main event is actually going to be. But this time around, it’s definitely going to be Brock Lesnar vs Bobby Lashley. A match that fans have wanted for many, many years. Both have had lots of success in the WWE, as well as in MMA. Lesnar in the UFC and Lashley in Bellator. Surprisingly, neither have been in the ring with the other, before Day One earlier this month.

At Day One, we saw a fatal-five-way for the WWE Championship, with Brock Lesnar being added after Universal Champion Roman Reigns tested positive for COVID-19. Lesnar ended up winning after Lashley speared him through a barricade. Which eventually set up this match. Many would say that is should be a Wrestlemania match, but it’s better now than never.

Shield brothers leave it all on the line for the Universal Championship
The other, arguably, main event match is for the Universal Championship, with Roman Reigns vs Seth Rollins. This is a rather interesting match, even though the two have fought before. Rollins’ championship reigns have all started from beating Reigns – including what WWE called the “heist of the century”. On top of that, the two were part of one of the most successful factions in The Shield. WWE did leave in some hints about The Shield, including Rollins’ knock on the door of Reigns’ office. Rollins even mentioned the third member of The Shield, not by his WWE stage-name, but by the name he uses in AEW. Which is quite interesting.

Mickie James enters the forbidden door, for the Women’s Royal Rumble
WWE pre-announced a lot of names for the Women’s Royal Rumble already, so there’s likely to be very few surprises if any. But one of those names was Mickie James. She was part of the mass cuts that WWE did after COVID-19 started. She has since gone over to Impact (formerly TNA) and is now the Impact Knockouts champ.

It’s not clear yet if she’ll be heading to the ring with her Impact Knockouts Championship title or not, but it’s likely.

This was pretty interesting since the WWE rarely works with other promotions. They like to act like they do not exist, when of course, they do. But in recent years they have mentioned TNA, now Impact. And also bad-mouthed them a bit, with a Kurt Angle line saying “TNA is hiring”. So the working relationship between Impact and WWE is not a surprise. What would be a bigger surprise is seeing them do this with AEW. Which is now their biggest competition, and have taken a lot of their talent they released over the last two years.

How to watch WWE Royal Rumble 2022
In the US, you can watch the Royal Rumble on Peacock. It’s cheaper than the WWE Network was at just $4.99 per month. And if you have Comcast or Spectrum, you can get it for free. The PPV is included in the cost of Peacock. So it’s a no-brainer to sign up for Peacock. Which you can do here.

Outside of the US, you will have to watch WWE Royal Rumble 2022 on the WWE Network. Unfortunately, the WWE is only on Peacock in the US.

What time does WWE Royal Rumble 2022 start?
The 2022 Royal Rumble takes place at the America Center in St. Louis, Missouri on January 29. Those that don’t have a ticket, the action will start at 8PM ET/5PM PT.

The kickoff show will start on Peacock at 7PM ET/4PM PT. The Kickoff show is a one-hour long pre-show that will break down all of the action before the show starts. It will also feature a match, which we are unsure which match that will be right now. It could potentially be the Raw Women’s Championship match between Becky Lynch and Doudrop.