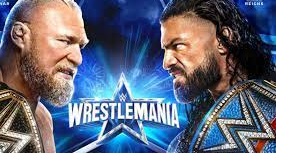 WWE’s first PPV since the big Wrestlemania extravaganza last month is happening this weekend. On Sunday, May 8, Wrestlemania Backlash is taking place at the Dunkin Donuts Center in Providence, Rhode Island. It’ll be the second year that WWE has used the name “Wrestlemania Backlash” for this event, typically it was just named “Backlash”.

The reason for it being called Wrestlemania Backlash is because a lot of the matches here are a result of the storylines that ended or continued at Wrestlemania last month in Dallas, Texas.

Wrestlemania Backlash has some pretty big matches for a non-big-four PPV actually. Including an “I Quit” match with Ronda Rousey and Charlotte Flair. Ronda Rousey won the Royal Rumble back in January, which gave her the choice of which champion she main-evented Wrestlemania with. She chose Charlotte Flair, despite having history with her and Becky Lynch (Raw’s champion at the time). Charlotte won their Wrestlemania bout, but that was after some sketchy tactics that both her and her father are known for. So now, we have an “I Quit” match for the Smackdown Women’s Championship at Wrestlemania Backlash. Many are expecting this to be the main event.

The overall card for Wrestlemania Backlash is pretty paltry, with only one championship actually being on the line – the Smackdown Women’s Championship. Last year at Backlash there were four titles on the line. This could also be because four championships are in that six-man tag team match.

How To Watch WWE Wrestlemania Backlash 2022
If you’re in the US, you’re going to need to subscribe to Peacock to watch Wrestlemania Backlash. Peacock costs just $5 per month, and brings in a load of other content to watch as well, from the NBCUniversal library. This is the third PPV that has been available on Peacock. Once you login to Peacock, you’ll see “WWE” in the top bar, click on that and you’ll see the PPV when it is live, as well as the rest of the WWE library.

The PPVs usually end around 11PM, making them about three hours or one Monday Night Raw. Given how short this card is, it might end even earlier than that. Though the Ronda vs Charlotte and the six-man tag match could end up being a lot longer than we expect. Especially with the latter being an I Quit match.