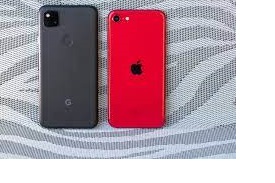 Apple recently announced the iPhone SE (2022), its new budget, mini phone. That handset has a truly powerful SoC, though most of its internals are left intact, and the same goes for its design. That handset doesn’t really have many competitors in the Android space, as there aren’t really that many powerful compact smartphones. We’ve compared the Pixel 5a with this handset recently, but the Pixel 5a is a lot larger. A better fit may be the Pixel 4a. So, in this article, we’ll compare the Google Pixel 4a vs Apple iPhone SE (2022).

The Pixel 4a is still larger than the iPhone SE (2022), but not by much, despite the fact it has a lot larger display. It is not in the same segment of smartphones, though, as it has a considerably weaker SoC, first and foremost. This should be an interesting comparison, though, as the Pixel 4a is much closer to the iPhone SE (2022) size-wise than the Pixel 5a. It is, however, over 1.5 years old at this point, so take that into consideration.

The iPhone SE (2022) has considerably thicker bezels than the Pixel 4a, but it doesn’t have a display camera hole. Apple’s compact phone has a physical capacitive fingerprint scanner below the display, while the Pixel 4a’s is located on the back. Both phones include a flat display, and both have a single camera on the back, in addition to a single selfie camera. The iPhone SE (2022) does have IP67 certification for water and dust resistance, while the same cannot be said for the Pixel 4a.

Apple’s handset does feel more premium in the hand, without a doubt. The Pixel 4a is made out of plastic, and you can feel that, plus that plastic does get greasy over time, if you don’t use a case. Physical buttons on both phones are quite tactile, while the Pixel 4a is a bit taller, wider, and thicker. They weigh about the same, though. The size difference is not that big, especially when you consider that the Pixel 4a’s display is much larger. The iPhone SE (2022) is more slippery, even though the Pixel 4a is not exactly grippy.

Google Pixel 4a vs Apple iPhone SE (2022): Display
The Pixel 4a features a 5.81-inch fullHD+ (2340 x 1080) OLED display. That is a 60Hz display, and it’s flat. It does support HDR content, and it has a display aspect ratio of 19.5:9. This panel is protected by the Gorilla Glass 3, which is not exactly the most modern solution. The Gorilla Glass 3 is quite prone to scratching over time, especially when it comes to micro scratches, so you may want to get a screen protector.

The iPhone SE (2022), on the flip side, has a 4.7-inch HD+ (1334 x 750) Retina IPS LCD display. This is also a 60Hz panel, and it’s quite dated, to be quite honest. It offers a 16:9 display aspect ratio, and it gets up to 625 nits of brightness at its maximum brightness point. It features Ion-strengthened glass. This panel is definitely less sharp than the one on the Pixel 4a, but that likely won’t bother you due to its size.

Both of these displays look fine. They’re definitely not the best you can find around, not even close to it. The blacks look far better on the Pixel 4a, as it’s visible the iPhone SE (2022) has an LCD display. The colors overall look really good on the iPhone SE (2022), considering that’s an OLED display. The Pixel 4a display also doesn’t look that great next to more premium OLED panels. Both displays are responsive enough, though, and offer good viewing angles, the Pixel 4a does do a bit better in that regard, though.

Google Pixel 4a vs Apple iPhone SE (2022): Performance
The performance is one area in which these two smartphones differ a lot. The Google Pixel 4a is fueled by the Snapdragon 730G SoC. Back when the Pixel 4a launched, 1.5 years ago, that chip was already mid-range, and not even one of Qualcomm’s most powerful mid-range processors. It is paired with 6GB of RAM inside the device, and the software is upgradable to Android 12, Google’s stock build.

The Apple iPhone SE (2022), on the other hand, features the Apple A15 Bionic SoC. That is Apple’s most powerful processor to date. That chip is actually included inside the iPhone 13 series, and it’s quite possibly the most powerful mobile chip (intended for smartphones) on the market at the moment. Apple paired it with 4GB of RAM inside the iPhone SE (2022). There is a difference in performance, that’s for sure.

The iPhone SE (2022) is more snappy, without a doubt. You’ll find it almost impossible to get the phone to slow down, as that chip can fuel much more powerful hardware, so this HD+ display is a piece of cake for it. Every game will play really well on the device. It’s simply a truly excellent chip that ensures great performance. The Pixel 4a will stutter from time to time, though it’s not exactly laggy, not even today. If you do plan on playing games, or using the phone like a power user, then it’s definitely not something to recommend. It can handle more intense use, but it’s not exactly meant to be used for the most processor-intensive tasks.

Google Pixel 4a vs Apple iPhone SE (2022): Battery
Truth be said, the battery life isn’t the strong suit of either of these two phones. Both phones come with rather petite battery packs. The Pixel 4a is larger, but Android handles battery consumption differently, plus the Pixel 4a’s display is much larger. In the general scheme of things, though, the Pixel 4a does offer better battery life.

Both of these phones support 18W charging. That has been categorized as fast charging, but I’m not sure we can call it that anymore. In a world where 150W charging is a thing, this is definitely not considered fast. The two devices don’t exactly have large battery packs, so they won’t take that long to charge. The iPhone SE (2022) also offers Qi wireless charging, though it’s rather slow.

Google Pixel 4a vs Apple iPhone SE (2022): Cameras
Now, both of these phones have fairly capable cameras. Each of them has a single rear-facing, and a single front-facing camera. Do note that these are not the most modern sensors, quite the contrary. Having that in mind, both phones rely heavily on software to boost the camera performance, and both of them do a good job. The SoCs play an important role in the whole process too.

Google Pixel 4a Review AM AH 4

The Pixel 4a has a 12.2-megapixel camera on the back, while the iPhone SE (2022) includes a 12-megapixel unit. Both phones can provide excellent-looking images during the day. Even the background blur is present, though it’s not as good as it would be with larger sensors. Both phones provide pictures with plenty of detail, while the dynamic range is good on both as well. The Pixel 4a images do pop a bit more, though.

When the light goes away, things are a bit different. The Pixel 4a does a good job, though it does have some noise in the images. Its Night Sight feature is excellent for low light scenarios, as it manages to retain a lot of detail, even though images do tend to look unrealistic. The iPhone SE (2022) does a good job in low light, but not in really dark scenarios, as it doesn’t have a dark mode. In moderately dark situations it’s actually rather capable, and can compete with the Pixel 4a. The video recording is better on the iPhone SE (2022), that’s for sure, in pretty much every way.

Audio
Both of these phones have stereo speakers, and the Pixel 4a even has an audio jack. The speakers are okay on both devices, though they’re not the best in the business, not even close to that. The bass is almost non-existent on both, and they don’t get extremely loud, even though they’ll be loud enough for most people. The main speaker sits at the bottom, while the secondary is front-facing on both phones.

Once you hook up a pair of headphones, you’ll get solid sound output, there’s really not much difference between them in that regard. As long as you don’t expect miracles, you’ll be just fine with either.