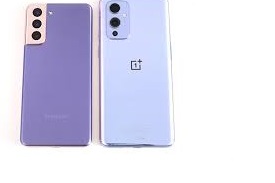 In this article, we’ll compare the OnePlus 9 vs Samsung Galaxy S21, high-end offerings from their respective companies. Now, despite the fact these are high-end devices, they are not the most powerful offerings from OnePlus and Samsung. We’ve compared the OnePlus 9 Pro vs Samsung Galaxy S21 Ultra a while back, though. It’s time to compare these two handsets which are both smaller and cheaper.

Do note that the two phones are not small, though. The OnePlus 9 is considerably larger, but we’ll talk about that soon. These two phones don’t have much in common, to be quite honest, but there are some similarities. We’ll talk more about how they differ below, just to help you make your purchasing decision. We’ll kick things off by listing their specs, and will then move to the design, display, performance, battery, camera, and audio categories. Let’s start with the OnePlus 9 vs Samsung Galaxy S21 comparison.

OnePlus 9 vs Samsung Galaxy S21: Design
These two devices do look somewhat similar, though it’s easy to tell them apart. Both of them come with flat displays, display camera holes, and rear cameras placed in a similar spot. There are a lot of differences in regards to their build, though. The OnePlus 9 utilizes a plastic frame, and combines it with a glass back. The Galaxy S21 is more premium in that regard, it uses a frame made out of metal, and a glass back.

Both devices are slightly curved towards the sides (on the back). The OnePlus 9 is considerably taller, wider, and heavier smartphone. Its European and North American variants weigh 192 grams, while the Chinese and Indian model weighs 183 grams (no wireless charging). The Galaxy S21’s Sub6 5G model weighs 169 grams, while its mmWave counterpart weighs 171 grams. Both phones feel like quality products, and some of you may not even notice the OnePlus 9’s frame is made out of plastic. They’re both quite slippery, though, so keep that in mind. The Galaxy S21 is the better choice for one-hand usage.

OnePlus 9 vs Samsung Galaxy S21: Display
The OnePlus 9 features a 6.55-inch fullHD+ (2400 x 1080) Fluid AMOLED display. It is a 120Hz panel with HDR10+ support. This display gets quite bright at 1,100 nits of brightness (max). It is protected by Gorilla Glass 5. We’re looking at a flat display here, and there is a display camera hole in the top-left corner. The bezels around the OnePlus 9’s display are quite thin, but they’re not uniform.

The Samsung Galaxy S21, on the other hand, features a fullHD+ (2400 x 1080) Dynamic AMOLED 2X display. This is also a 120Hz display, but it’s adaptive when it comes to refresh rate. This panel also supports HDR10+ content, and it gets quite bright at 1,300 nits of peak brightness. The Galaxy S21’s panel is protected by the Gorilla Glass Victus. This is also a flat display with a display camera hole (centered), and its bezels are thin but not uniform.

The Galaxy S21’s panel does look better on paper. Both of these displays are excellent fullHD+ panels, though. Truth be said, they both look excellent, even when you put them side by side. They’re quite bright, vivid, and offer great viewing angles. On top of everything, they’re more than sharp enough. The Galaxy S21’s panel is sharper due to the smaller screen size, but that’s not something you’ll notice, not at all. You can’t go wrong with either of these two displays.

OnePlus 9 vs Samsung Galaxy S21: Performance
In regards to performance, well, neither of these two phones will disappoint. Both of them are equipped with high-end specifications, and have rather well-optimized software offerings. Both of them are fueled by the Snapdragon 888 SoC. Truth be said, the Galaxy S21 also comes in an Exynos variant. The Snapdragon 888 option definitely has more to offer, though, but both phones will work more than well enough.

Both smartphones also come with fast RAM, and UFS 3.1 flash storage. That, in combination with their SoCs, and Android 11 that comes out of the box, makes for a really compelling package. They do have different Android skins attached, but they’re both well-optimized, and work really well.

These two phones can fly through your regular, everyday tasks. No matter if you’re browsing, opening / closing apps, consuming multimedia, taking pictures, doing plenty of multitasking… or something else entirely, these two phones will do just fine. They also do really well on the gaming side of things, in case you were wondering. We didn’t notice any noticeable lag on either device during our review period. Do note that we did not get a chance to use the Exynos variant of the Galaxy S21, though.

OnePlus 9 vs Samsung Galaxy S21: Battery
The OnePlus 9 features a 4,500mAh battery. The Galaxy S21, on the other hand, has a 4,000mAh battery. The difference in battery size is to be expected considering the difference in their display sizes. It is worth noting that the Galaxy S21 also has an adaptive refresh rate, so that helps with battery life as well. Now, the battery life on these two phones is not bad, not at all. It’s also quite good, but not excellent.

If you’re careful with your usage, getting to around 6 hours of screen on time is a possibility. Though, realistically, it’ll be closer to 5.5 hours. If you do get some gaming in the mix, those numbers will be lower. They both offer good battery life, but they’re nowhere near the best battery life smartphones in the market. Luckily, both smartphones do offer fast charging.

One notable minus when it comes to the OnePlus 9 is the lack of OIS support. The phone can capture really nice pictures, but you’ll notice the lack of OIS in low light. The Galaxy S21 does offer noticeably better low light pictures, even though the OnePlus 9 does a good job considering everything. In good lighting, they both do a great job. The colors are even better on the OnePlus 9, though the images in general do seem a bit more punchy on the Galaxy S21. The Galaxy S21 still tends to make them more vivid in general, which is something most of you will probably like.

Audio
When it comes to audio, it’s worth saying that neither of them offers a 3.5mm headphone jack. They do offer stereo speakers, though. The main speaker sits at the bottom, while the secondary is above the display, that goes for both phones. Both sets of speakers are really good, but the Galaxy S21 has the edge. The sound coming from its speakers does sound a bit richer, and the vocals a bit crisper. The difference is really not that noticeable, though.

When you plug in Type-C headphones, regular headphones via a dongle, or simply connect them via Bluetooth, you can get really good sound. Both offer well-balanced audio, and we don’t have any major complaints here. The bass is not the best, but that’s something that pretty much all modern smartphones have in common. Your headphones will also make a huge difference, some tend to offer more bass in general, so… it all depends on what you’re using.