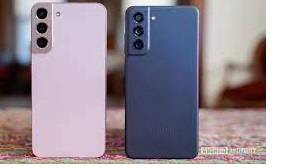 In this article, we’re comparing two somewhat similar smartphones, the Samsung Galaxy S22+ vs the Samsung Galaxy S21 FE. Both of these have been announced by Samsung in the first quarter of this year. That being said, they’re both fairly new. These two phones even look quite similar, while they do share some similar specs on top of that, and the same goes for their software.

They are not the same, though, of course. Some of you are probably still wondering which of the two to get. Whether it’s wise getting the Galaxy S21 FE instead of the Galaxy S22+ in order to save some cash. Well, we’ll compare the two devices down below, and help you answer that question along the way. We’ll list their specs first, and then start comparing them across a number of categories. Let’s kick off the Samsung Galaxy S22+ vs Samsung Galaxy S21 FE comparison.

Both phones come with a frame made out of metal, but their backplates are different. The Galaxy S22+ has glass on the back, while the Galaxy S21 FE comes with a plastic backplate. Both phones include three rear-facing cameras, and both sets are vertically-aligned. You’ll find a flat display on the front side of these phones, and a display camera hole at the top. The physical buttons are located on the right side of both phones, and in similar spots.

That being said, the Galaxy S22+ is a bit bigger, which is not surprising considering its display is larger. It is taller, wider, and slightly thinner. It’s also heavier by almost 20 grams. You will notice the weight difference, but the size difference is not that big, to be quite honest. Both phones are quite slippery, though, so keep that in mind, as you’ll likely want to use a case. Both devices do feel premium in the hand.

Samsung Galaxy S22+ vs Samsung Galaxy S21 FE: Display
The Galaxy S22+ features a 6.6-inch fullHD+ (2340 x 1080) Dynamic AMOLED 2X display. That panel is flat, and it offers a 120Hz refresh rate. This display does support HDR10+ content, and it gets really bright at 1,750 nits of max brightness. Do note that you can achieve that brightness only via auto brightness setting, though. This panel is protected by the Gorilla Glass Victus+.

The Galaxy S21 FE, on the other hand, features a 6.4-inch fullHD+ (2400 x 1080) flat display. That is also a Dynamic AMOLED 2X panel with a 120Hz refresh rate, but it’s not the same, obviously. HDR10+ content is supported here as well, while the display is protected by the Gorilla Glass Victus. That display gets plenty bright as well, but not to an extent the Galaxy S22+’s does.

Both displays are excellent, to say the least. Both of them are more than sharp, while they get plenty bright. The Galaxy S22+’s panel will be better for direct sunlight conditions, though, of course. The viewing angles are great on both panels, while the colors are rich and vivid. Touch response on both displays is really good, while that high refresh rate does contribute to an overall nice experience. So, the Galaxy S22+ does have the upper hand here, but most people won’t really notice nor care, both displays are excellent.

The Galaxy S22+ includes 8GB of RAM, while the Galaxy S21 FE packs in 6GB or 8GB of RAM, depending on the variants. Both phones do offer excellent performance, at least when it comes to their Snapdragon variants. The Exynos models have been reported to offer inferior performance, but we didn’t get a chance to test those. The Snapdragon 8 Gen 1 models are excellent in that regard, though.

They do feel like flagship-grade phones, no matter the way you slice it. They open and close apps really fast, browsing is a joy, and so is taking pictures and videos. Image and video editing is a breeze, while both phones can handle pretty much any game out there… for smartphones. Both devices did get warm during gaming, especially the Galaxy S22+. That didn’t affect performance at all, though.

Samsung Galaxy S22+ vs Samsung Galaxy S21 FE: Battery
These two devices do come with the same battery capacity. Both phones include a 4,500mAh battery. Is the battery life any good, though? Well, yes, it is. Both of them offer really good battery life, though not the best in the market. We usually got around 6-6.5 hours of screen on time, while the Galaxy S22+ was a bit more consistent in that regard. Do note that your mileage may vary, of course.

Talking about screen-on-time is not always the best way to judge battery life, but there you go. Each of us use our phones differently, so your results will certainly be different. Do note that these numbers are without gaming, or very light gaming. We played games only for testing purposes, so they weren’t exactly in the equation for regular, day-to-day usage.

So, how do these cameras compare? Well, out of the two, the Galaxy S22+ takes the cake as the better camera smartphone, but the difference is not that big, to be quite honest. The two phones take somewhat similar pictures, though you’ll see the difference in fine detail on the Galaxy S22+. Both phones do like to crank up the saturation, but only a little bit, and that arguably makes the pictures look better.

Both phones have really good white balance, and dynamic range. The Galaxy S22+ is better for taking macro shots, though neither is excellent in that regard. Ultrawide pictures do look great on both smartphones, though they do look a bit different. The color temperature seems to be a bit different, plus the ones on the Galaxy S21 FE do turn out to be a bit darker. Both phones perform well in low light, but the Galaxy S22+ can retain more detail in such environments, and it, in general, offers better-looking low-light photos.

Audio
Both of these smartphones feature stereo speakers. Both of them have a bottom-firing main speaker, and a front-firing secondary speaker. Those speakers also sound very similar here. They can both provide you with 32-bit/384kHz audio, and sound really rich. They also get very loud, and with minimal distortion at the highest volume levels. The vocals also end up sounding really good, and not overpowered.

A 3.5mm headphone jack is not present on either phone. You can either opt for a Type-C port, or for a Bluetooth connection. You’ll need a good pair of headphones, as these two phones can provide you with a rather good sound over Bluetooth, well, as long as you manage your expectations.