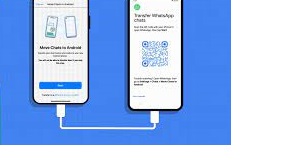 WhatsApp earlier this year rolled out the ability to transfer chats from iOS to Android. This feature was initially exclusive to Samsung Galaxy devices, though the company promised to add support for Android devices from other OEMs as well in the future. Google’s Pixel devices are the next in the pipeline. The internet giant has announced that “all Pixel phones” now support WhatsApp chat transfers from iPhones. Moreover, all new Android smartphones launching with Android 12 will also support this feature. So it will not be a Samsung or Google thing for much longer.

Transferring your WhatsApp chat history from an iPhone to an Android smartphone is a fairly simple process. The transfer will take place locally, meaning you’ll require to connect the two phones using a cable. Unfortunately, Apple sticking to a Lightning port on iPhones means you need a USB-C to Lightning cable to get started.

Once you’ve connected the two phones, you’ll get a prompt while setting up your new Android device. It will ask you to scan a QR code with your iPhone for the transfer process to begin. You can also open WhatsApp on your iPhone and navigate to Settings >> Chats >> Move Chats to Android to move all your “conversations, media, and more” over to your new Android device.

Google says your WhatsApp data will be “protected” during the transfer process so no one can access it. It will simply copy the information from the iPhone and bring it over to your Android phone. The company will also ensure that new messages aren’t delivered to your old device while the transfer is in progress.

iOS-to-Android WhatsApp chat transferring is coming to all new Android 12 devices
The ability to transfer chats from iOS is available on all Samsung devices running Android 10 or higher. But they also require the Samsung SmartSwitch app. Google Pixel phones have no such additional requirement. And going forward, it appears the company is adding this feature to the Android OS itself, starting with Android 12. So in a few months, transferring chats from iOS to Android should not be a big deal as most new devices will support the feature.

Meanwhile, it recently appeared that WhatsApp is also working on the ability to transfer chats the other way round, i.e. from Android to iOS. This feature is currently in development and should be available in the coming months. We’ll keep you posted about all these developments around cross-platform transferring of WhatsApp chats.