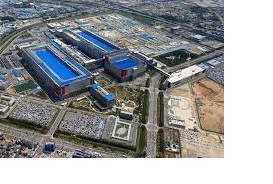 Samsung Foundry manufactures semiconductor chips for some of the biggest names in the tech world, including Qualcomm. But the latter has never been the Korean firm’s biggest client. It likes to split manufacturing orders between Samsung and TSMC, with the latter usually getting the bigger contracts. However, it was different for the Snapdragon 8 gen 1 processor. Qualcomm had its latest flagship chipset manufactured solely by Samsung. In the process, the company found itself a spot among the Korean firm’s five biggest chip customers for the first time.

In a recent corporate filing, Samsung Foundry named Qualcomm alongside its sister firm Samsung Electronics, Apple, Best Buy, and Deutsche Telekom as its five biggest chip customers in the first quarter of 2022. The company didn’t reveal the size of the orders it received from these firms but according to a Yonhap News report, the five customers accounted for 14 percent of Samsung’s total sales this past quarter. Its Foundry division posted its highest quarterly sales during the first three months of the year.

Samsung Foundry is struggling to retain customers
Samsung’s Foundry division has had its fair share of troubles over the years. But it is still one of the Korean conglomerate’s most profitable business divisions. A substantial amount of its revenues come from the contract chip manufacturing business. While it isn’t anywhere close to TSMC (52 percent vs. 18 percent market share), Samsung remains a big name in this space.

Unfortunately, the never-ending troubles have somewhat limited its scope for growth. The Korean firm is struggling to keep its customers happy. Recent reports suggest that Samsung’s yield rate for 4nm chips is way too low. As such, Qualcomm is now switching back to TSMC for the Snapdragon 8 Gen 1+, which is all set to go official this Friday, May 20th.

Samsung is now hoping to regain some of the lost ground with the introduction of 3nm GAAFET chips later this year. GAAFET, which stands for Gate-All-Around Field Effect Transistor, is a more advanced chip technology that allows for improved performance and lower power consumption.

With TSMC reportedly sticking to the older FinFET architecture for 3nm chips (switching to GAAFET for 2nm chips in 2025), the Korean behemoth may have an upper hand over its arch-rival for the next couple of years. But ahead of that, it’ll have to improve the woeful yield rates. Time will tell whether Samsung can catch up to TSMC in the contract chip manufacturing industry anytime soon.