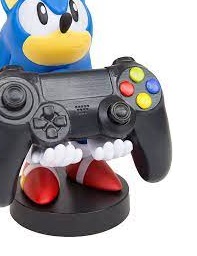 Razer has collaborated with Xbox to release a limited edition Xbox wireless controller featuring a Sonic The Hedgehog theme. This would be far from Razer’s first licensed peripheral with a design theme based on a popular game or franchise. It has multiple Star Wars controllers and a new Captain America themed controller as well. Not to mention a horde of themed keyboards, mice, and headsets.

The new limited Xbox controller from Razer comes with a matching quick charging stand that also carries the Sonic the Hedgehog theme, and it’ll retail for $199.99 when it officially launches. Right now though Razer hasn’t said when the controller will be available for purchase.

However, if you want one you’ll need to sign up to be notified once it goes on sale. It’s either that, or take your chances that Razer has enough stock for anyone who goes to place an order on a whim.

The Sonic Xbox controller from Razer is universal
This probably comes as no surprise but the controller is universal which means you can use it with more than just the Xbox. It can also be used with Windows for PC gaming, as well as mobile devices for Android and iOS games. Or cloud gaming with services like GeForce NOW.

This is also the new wireless controller that comes with the Xbox Series X|S. So it has the impulse analog triggers, textured grips on the back, and the new share button. All that aside, the star here is the Sonic themed design. And if you’re a fan of Sonic and/or a collector of Xbox controllers, then this is probably something you’ll want to add to your collection.

Overall it’s a nice design that pays homage to one of gaming’s most recognizable characters. If you’re wanting to pick this up for yourself, you can find it Razer’s online store where you can sign up to be notified of its release.