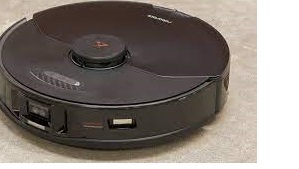 Two of the biggest names in the robot vacuum space are duking it out this time. The Roborock S7 MaxV Plus vs the iRobot Roomba j7+. These robot vacuums are somewhat in different leagues, but it does still make sense to compare them. Since they are both targeting pet owners, even though the Roborock S7 MaxV Plus is a few hundred more than the Roomba j7+. But we though it would be unfair to compare the auto-empty version of the Roomba j7 to the non-auto-empty version of the S7 MaxV.

And the reason why we are not comparing the S7 MaxV Ultra here is because it’s currently out of stock and also almost twice the price of the Roomba j7+, making it less likely that customers would be comparing the two.

Roborock S7 MaxV Plus
The Roborock S7 MaxV is probably the best robot vacuum that Roborock has ever made. However, it is better with the Ultra dock, but that is another couple hundred of bucks. But the Plus auto-empty dock is plenty good still.

It’s not a cheap robot vacuum, coming in at $859 (without the dock), but boy does it have a lot going for it. Let’s start with the vacuuming. It has 5100Pa of suction power, which is currently the most on the market right now. What does that mean in real life though? Well, it means that any dirt, dust and other debris in the carpet of your floors, will easily be picked up. Even more so than most other robot vacuums.

There’s also the stereo camera on the front, with ReactiveAI 2.0. This allows the S7 MaxV to go ahead and dodge all of the obstacles on the floor. That includes things like dog toys, charging cords, shoes, scales and even pet waste. It does a really good job of avoiding these obstacles as well, which is always good to see.

Then there’s the mopping. Roborock added the Sonic Mopping and VibraRise from the S7 that it released last year. Allowing it to do a great job of cleaning those dried-on messes. And with VibraRise, it means that it can lift the mop off of the floor and clean your carpet in the same cycle. Instead of other robot vacuums that force you to take the mop off to clean the carpeted rooms. Which I absolutely hate, after using the S7 and S7 MaxV for well over a year.

Finally, the biggest addition to the mopping feature on the S7 MaxV is that you can use soap now. You are limited to the soap that is made specifically for this robot vacuum, but it’s better than using just regular water.

Roborock S7 with the Auto-Empty Dock
This Auto-Empty Dock is actually really nice to have. So there are towers, essentially. One has a filter that the debris run through, before moving to the other tower and getting into the dustbag. This is because it has a HEPA filter inside, making it great for those with allergies. It can hold up to about eight weeks of dirt and debris before it needs to be emptied.

The great thing here is that you don’t need to buy the dock at the same time as the robot vacuum. That is because Roborock does actually sell both the Auto-Empty Dock and the Ultra dock separately.

iRobot Roomba j7+
The Roomba j7+ is the latest robot vacuum from iRobot, having been unveiled in the fall of 2021. It’s a pretty interesting model from the company, and one that seemingly was made to fix one major issues its customers had. And that was the fact it would run over pet waste and spread it all over the house. With the Roomba j7+ that is no longer an issue.

iRobot Roomba j7 plus AM AH 09

Much like Roborock, iRobot is using a camera on the front (though it’s just one, and not two like the S7 MaxV has). This camera is used to identify and avoid obstacles. In my review from a few months ago, I found that it did this very well. It never needed rescuing either. It can also automatically suggest areas to avoid, which is pretty neat.

On robot vacuums, I feel like the design doesn’t matter a lot, but the whole package here is very modern. The auto-empty dock is also very small, and modern, so it doesn’t look like an eye-sore in your home.

Like Roborock, the Roomba j7+ also uses rubber brushes. iRobot actually did this first. But instead of just one rolling brush, it uses two. And despite not being as powerful, it does seem to clean about as well as the S7 MaxV. This is largely because the j7+ has two brushes that are very tight, and very close the ground. So it’s able to pick up more dirt and debris.

The main reason why this works better is because iRobot is not using that opening to empty the dustbin. Roborock uses the rolling brush opening to suck the dirt and debris out of the dustbin into the dock. iRobot has another opening that it uses, and works a bit better.

Auto-Empty Dock
There’s actually nothing special about the Auto-Empty dock on the iRobot Roomba j7+. It does what it says it’ll do, and that’s about it. I haven’t had any problems with it, in the two months I’ve been using it. Though I have noticed that it needs to go and empty more often than the Roborock S7 MaxV has had to.

iRobot Roomba j7 plus AM AH 12
It still holds dirt and debris for about 6-8 weeks before it needs a new dustbag. So about the same as other auto-empty docks on the market.

The one downside here is that, you cannot buy the dock after you buy the vacuum. You either buy it at the time you buy your robot vacuum, or you suffer without one. That’s where I think Roborock has iRobot beat right now.

Which should I buy?
These are both very great robot vacuums, and I’ve had the pleasure to be able to use both models extensively. I’d say that the iRobot Roomba j7+ is better for those that have more carpet in their home, and potentially a smaller home or apartment. Whereas the Roborock S7 MaxV Plus is better for those with hardwood, laminate or tile flooring, since it can also mop (and do a good job!). Both are great for pet owners too.

If you’re also one that just wants to set and forget, then the iRobot Roomba j7+ is the one for you. There’s not many settings available, which makes it great for your parents or grandparents to use.