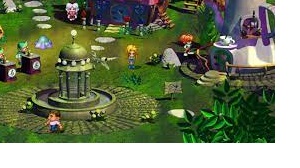 SaGa Frontier Remastered is available on Android today. And although it’s going to cost you $25 to install it, it’s the best $25 you’ll spend today.

Square Enix is well-known for porting its most popular RPG titles to mobile for a high price. So when you see a full-blown port of a top of the line game, you can expect it to be upwards of $15 or more. SaGa Frontier Remastered was also just released onto Nintendo Switch, PS4 (which also means you can pick it up on PS5), Steam, and iOS.

Whether you’re new to the series, or a long-time fan, don’t miss the opportunity to relive the glory of this masterful RPG.

In addition to the remastered graphics, the game also comes with some new features and content. For starters, it’s now possible to play as one of the game’s most beloved characters – Fuse.

In the original, Fuse was a character you could recruit to your party. But now you have the opportunity to dive into his backstory as he’s a playable main character along with the initial seven from the original release. He specializes in close range melee combat.

Alongside the new main character option, Square Enix has also added in a handful of different cutscenes that were not available in the original game. Allowing more backstory development for Asellus. There’s also a double speed mode if you want things to move more quickly.

Double speed mode or something similar is available in a lot of Square Enix RPG ports and re-releases. So this was to be expected.

And controller support is there, so if you want to use a mobile gamepad, like the Razer Kishi for example, you can. The game also supports cloud save so you can move your progress between devices. Square Enix says there are other new features as well. But it doesn’t list what they are.

If you like RPGs, give this one a shot. Final Fantasy may be Square Enix’ most popular franchise, but the SaGa Frontier series is still very good and this will no doubt be one of the best JRPG titles on mobile. Even if it is a couple of decades old.