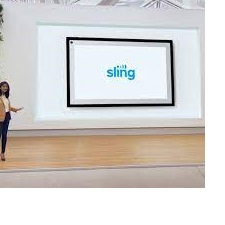 Just recently, Amazon had a huge hardware and announcement event. At that event, Amazon announced quite a few things, among which was the arrival of the Sling TV app for all Echo Show devices very soon.

Yes! You heard it right. The popular live TV streaming app will now be available for all Echo Show devices in near future. This news is pretty exciting, especially for users who prefer linear watching.

For those who do not know, Sling TV is an American television streaming service. It is the first app-based TV service allowing you to watch all your favorite TV channels and on-demand content over the internet, live.

During the event, Amazon revealed that its Echo Show devices will soon support live and linear viewing via the Sling TV app. On top of this, the Sling TV support will also be available for the new wall-mounted Echo Show 15 device.

As noted by The Verge, this would definitely change the way users interact with their Echo Show devices. Because, Sling TV support will let you make use of the Echo Show devices, more like traditional television, especially in kitchens, or small rooms, where the space is limited.

The app will be available for all Echo Show devices in the US very soon. This was confirmed by Amazon to The Verge. After the app is widely available on the Echo Show devices, Alexa will ask its users to tune in to their favorite channels.

Moreover, you could also add your favorite TV shows or movies, as Sling TV also provides on-demand series and movies. In order to use the Sling TV app, you need to have a subscription to one of Sling TV’s live TV packages.

So, if you get yourself a Sling TV subscription and you have an Echo Show device, then soon you will be able to view all of your favorite channels and movies right on your Echo Show device.