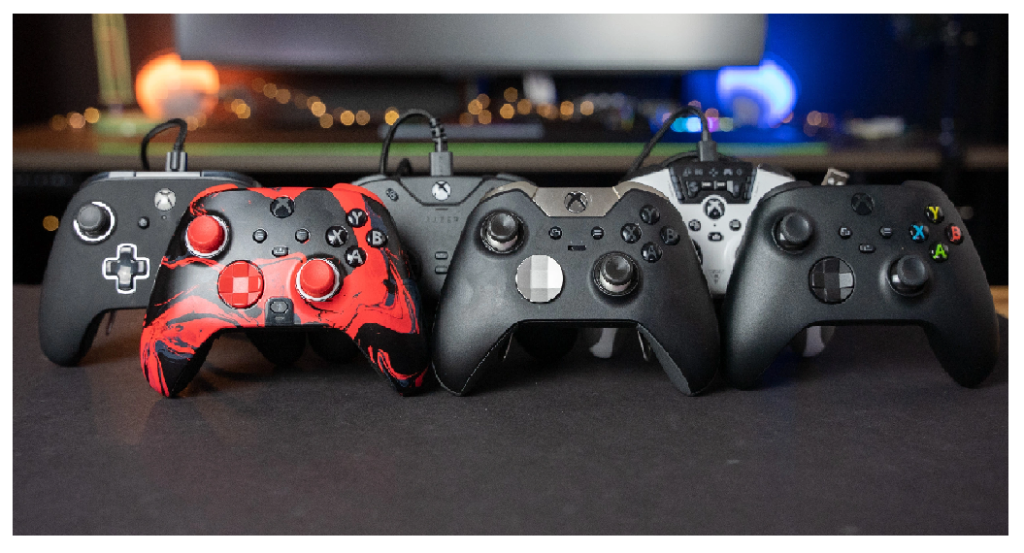 If you have an Xbox Series X|S console, then you may want to at least consider what the best controllers are going to be for your own personal setup. Maybe for you that’s the new Xbox wireless controller that comes in the box. But maybe you prefer something with more features that was designed to give you an edge.

That is if you’re looking for a new controller in the first place. Keep in mind that the standard controller is perfectly fine, and we’re actually pretty fond of it ourselves. But it’s not the only option. So these are the best Xbox Series X|S controllers you can get your hands on.

There’s nothing wrong with sticking to the original. The Xbox Wireless controller (the new version that has the share button), is as basic as Xbox Series X|S controllers get but it’s still one of the best controllers you can use on the console. The textured hand grips, the simple design, and a lighter feel than some of the other options out there are all winning features.

Plus, you’re generally going to pay less for this than a lot of the other controllers on the market that are meant for this platform. The fact that it’s wireless also helps. And another major bonus is that it never needs charging. All you have to do is swap out the batteries for a fresh pair.

Sure you have to buy more batteries. But they’ll last a while. And it’s one less thing you have to plug in.

If you like the standard Xbox Wireless controller then the Elite Series 2 may be the way to go if you want something much more customizable.

It has excellent grip for less slippage, and you can swap a ton of different stuff out including the thumb sticks and d-pad. You can also adjust the height of the thumb sticks, the triggers, and you have paddle buttons on the back for extra controls.

The controller is certainly expensive, but it’ll be worth it when you elevate your game thanks to all of its nifty little bonuses.

Speaking of customization, the new Instinct Pro from SCUF Gaming is one heck of a controller for the Xbox Series X|S, and also one of the best. Like the Elite Series 2, you can swap out some of the buttons, while also adjusting things like the tension of the triggers to require less travel between the button press and the action completion.

On the back you’ll find high-performance grip, as well as four additional buttons. Plus, you can map the buttons to various controls, and save up to three different profiles designed for specific types of games. Which you can swap between on the fly.

If that wasn’t enough, SCUF also allows you to customize the looks. Complete with multiple color options and combinations and more.

All three of the previous controller options above are wireless. So we’re stepping into wired territory now with the Razer Wolverine V2 Chroma. Since it’s wired there are a couple of obvious benefits. One, you are likely to have less input-latency. And two, you don’t ever have to worry about charging it.

The Wolverine V2 Chroma offers quite a few features, including six multi-function buttons that you can map to just about whatever you like. It also has a Hair Trigger mode with trigger stop switches for super fast action in the heat of the moment.

Naturally, it also comes with Chroma lighting along the sides. And it works with both Xbox and PC. This is definitely one of the best Xbox Series X|S controllers to get if you don’t want something that needs batteries or recharging.

When we reviewed the RIG Pro Compact earlier this year, we found it to be a wonderful little controller that performed well and felt good when using it. And when we say little, we mean little. It’s perfect for people with smaller hands that don’t like the feel of larger controllers.

Compact is in the name and it’s not just a quirky add-on. While not excessively small, it is smaller than any of the other options on this list so far. You can even remap the controls on it if you want to customize things a little bit.

And it even comes with Dolby Atmos for Headphones built right into the controller. So all you have to do for higher quality sound in your games is plug your headset into the controller. It also comes in both white and black, and it’s got a super long cable so you can even use it across the room. Provided your Xbox isn’t like 15 feet away.

If all you’re looking for is a personalized controller in terms of design, Colorware has some pretty cool options available. The company actually custom designs a lot of different hardware, and the Xbox Series X|S controller is one of the newer products.

What makes this unique from most controllers out there is the amount of color options you can choose from. And you can apply those colors to various different sections of the controller.

Be forewarned though. Getting it may take some time.

You’re essentially getting the same thing here as you do with the Colorware controller. This one though comes directly from Microsoft. You don’t have as many colors and finishes to choose from, but it’s noticeably less expensive, and you can even add your gamertag or a cool little note or phrase onto it.

Take some of the features of the Elite Series 2 and SCUF Instinct Pro, mash ’em together, take the wireless option away and you have the PowerA Fusion Pro 2. It’s compatible with Xbox Series X|S, and has four additional paddle buttons on the back that you can map to various in-game functions.

There’s also some nifty textured hand grips on the back, a three-way trigger lock, and you can swap out things like the thumb sticks and even faceplates for a different look.

Rounding out this list is the Evil Shift for Xbox Series X|S. This is a custom controller that you’re building the features for from the ground up. It starts with a more or less basic Xbox Wireless controller, and then you can tune things by adding different custom features.

For example, you start by choosing a faceplate design. Then you move through everything from thumb sticks with different heights to hairpin triggers and shift buttons on the back.

Keep in mind that each option is an additional cost. So the price of this controller can rise pretty quickly. But for a completely customized, unique controller, the price might be worth it.