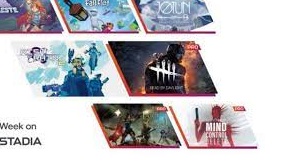 Today Google announced the official list of games coming to Stadia Pro subscribers in October. The list is mostly indie titles, but there’s also one really good AAA title included that you won’t want to miss.

The other notable detail about the October Stadia Pro games is that there’s quite a few of them. Five to be exact. Now this shouldn’t be too surprising to anyone that’s subscribed to Stadia Pro for a while. Google is no stranger to adding a handful of games to the list each month.

Most months even, there have been at least three games added to the Pro lineup. While it’s exciting to watch your list of Pro games grow, don’t forget that while Google giveth, Google also taketh away. Make sure to claim any Pro games that may be leaving the roster once October rolls around.

As mentioned above there is one AAA title hitting the roster this coming month. That title is Control, developed by Remedy Entertainment and published by 505 Games. In Control, you play a newly appointed director of a secretive government agency and you gain a wealth of supernatural abilities.

You’ll need to use these abilities to fight against an equally supernatural and otherworldly threat. Control is an action adventure game, and you’ll be getting the Ultimate Edition as part of the Pro lineup. Which means it includes any extra content that’s been released for the game since it launched back in 2019.

Don’t forget to try out Phone Link
Earlier this week Google officially announced Stadia’s new Phone Link feature. Letting you use your smartphone’s touchscreen as a touch gamepad for Stadia games on your TV. This feature should already be live for some users.

Google did however state that the rollout would begin with 1% of the userbase following the feature’s announcement then expand from there. Reaching 100% within a few days.