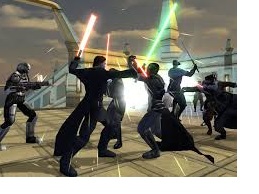 Star Wars Knights of the Old Republic II: The Sith Lords (Kotor 2) is one of the most popular RPGs of all time. The famous Star Wars game is the direct sequel to the original Kotor.

After you reach a certain point in the story, you are given the option of exploring Kotor 2’s galaxy however you want, with the opportunity to choose which planets you will traverse. Here is the best Kotor 2 planet order and the best way to travel the stars.

The Best Kotor 2 Planet Order is:

It is essential to traverse these planets properly so that you can enjoy the story better and maximise your characters’ abilities before you reach the end of the game.

Kotor 2 Planet Order Guide
1.Na Shaddaa
The first planet you visit should be Na Shaddaa. Na Shaddaa is a moon that orbits the Hutt homeworld of Nal Hutta. The planet is called the smuggler’s moon and is run by the infamous Hutt Cartel. Thus, the planet is full of corruption and illegal activities.

Once on the planet, the game has your character defeat bounty hunters, save a Jedi master, and stop a criminal organisation. Thus, it provides an excellent introduction to the world of Kotor 2 without being super challenging, allowing you to level up for more complicated parts of the game.

This planet should be the first place you visit on your journey due to your activities on the planet setting up nicely your future endeavours in-game.

2.Ondoron/ Dxun Part 1
After leaving Na Shaddaa, you should make your way to Dxun, a jungle moon located near Ondoron. Dxun is a moon inhabited by dangerous wildlife; after landing on the moon, your character is quickly mobbed by creatures such as the Zakkeg.

After making your way through the moon and meeting Mandalore Canderous Ordo, the game has your character find a Jedi master in hiding on the planet of Onderon. After completing this mission, Canderous Ordo decides to join your team, aiding you in your adventure.

Thus, traveling to these two planets first is the best way to travel, allowing you to not only level up but gain a powerful new ally in the fight against the Sith. Canderous Ordo is one of the best shooters in the game and will be vital in helping you to defeat the game’s most complex challenges.

3.Dantooine
To follow the best Kotor 2 planet order, you should next travel to Dantooine after recruiting Canderous on Dxun/Ondoron. Dantooine is a planet initially introduced in the first Kotor game. The world was home to a Jedi enclave that helped turn Darth Revan toward the light side of the force.

However, it was destroyed by Darth Malek in subsequent years. Once on the planet, the game has you and your companions help defend against a Sith onslaught alongside Jedi Master Vrook Lamar.

Dantooine is the next best place to visit on this list due to not only offering a moderate level of challenge for the final game boss but bridging the gap between the first and the second game in preparation for Kotor 2’s final story reveals.

4.Ondoron/ Dxun Part 2
After saving Dantooine from the Sith, you should revisit the Ondoron/Dxun story arc. Once back on the two planets, the game has you defeat several Sith and stop a civil war on Onderon.

Revisiting the two planets is the best place to set up several story arcs that will play out later in the story. The story arc also offers considerable challenge making it the ideal place to visit near the end of the game.

5. Korriban
The final planet in our Kotor 2 planet order is Korriban; it should be the last place you visit in the game. Korriban was initially present in the first Kotor game and is known as the homeworld of the Sith. The game has you fight ancient Sith lords searching for a Jedi master, which quickly leads into an ambush by Darth Sion, one of the game’s main villains.

Leading Korriban to last is ideal due to the planet’s difficulty and the boss fight with Sion. Also, it perfectly sets up the game’s end sequence and story arc.

Final Thoughts
Overall, the Kotor 2 planet order above is the best way to traverse the stars and story. With the likely release of a Kotor remake shortly, inevitably, a Kotor 2 may also get remade, making this guide even more beneficial.