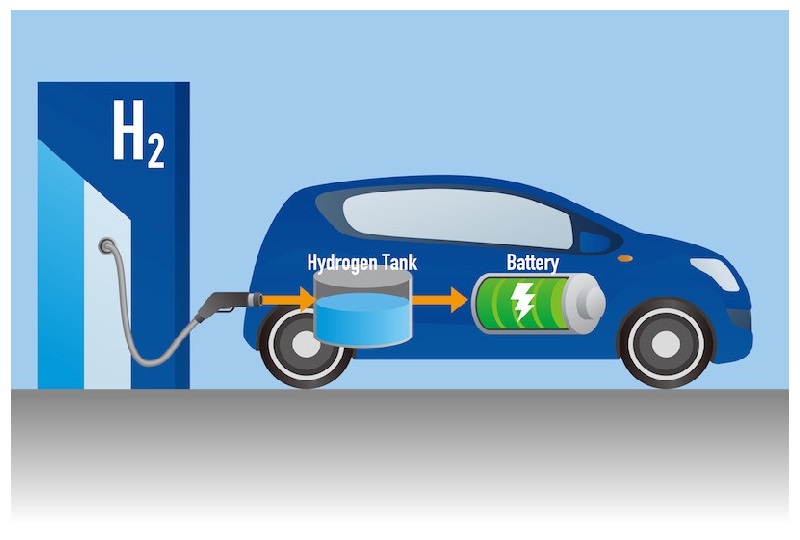 The term ‘water-powered’ cars is misleading. In fact, the vehicle is powered by the combustion of hydrogen, which is made by electrically splitting water molecules into hydrogen and oxygen gases by electrolysis. By burning the hydrogen gas, water is produced, which means that combustion is clean. For this reason, the automotive industry should be interested in hydrogen gas, which is a cleaner technology.

Like all-electric vehicles, fuel cell electric vehicles use water to power an electric motor. In contrast to other electric vehicles, The electrolysis of one mole of water produce a mole of hydrogen gas and a half-mole of oxygen gas in their normal diatomic forms, rather than drawing electricity from only a battery. During the vehicle design process, the vehicle manufacturer defines the power of the vehicle by the size of the electric motor(s) that receives electric power from the appropriately sized fuel cell and battery combination. A detailed analysis of the process makes use of the thermodynamic potentials and the first law of thermodynamics, and to smooth out the power delivered from the fuel cell with the option to idle or turn off the fuel cell during low power needs. The process must provide the energy for the dissociation plus the energy to expand the produced gases. This is different from an all-electric vehicle, where the amount of power and energy available are both closely related to the battery’s size.

The water-powered car has long been shrouded in skepticism and controversy ever since it was invented. Many scientists believe that the energy it takes to split hydrogen from water outweighs the energy output you get from the hydrogen combustion to power the car. Therefore the energy you expend to split the water may as well be used to power the car, in other words, you may as well look to electric vehicles.

Fuel Cells Made From Water

Stanley Meyer claimed to have invented a water fuel cell that used less energy to power the electrolysis to split hydrogen from water than conventional science would dictate. However, in 1996 an Ohio court found these designs to be fraudulent. There was nothing revolutionary about his invention, the cell was using conventional electrolysis, and while his invention is now in the public domain, no vehicle manufacturer has yet tried to copy his work.

The bottom line is that the draw of the water-powered car is that in theory, the technology is clean. It offers a way to power vehicles by putting in only water and emitting only water vapor. However, the electrical current required to perform electrolysis is a factor that cannot be ignored. There have been no legitimate designs to perform electrolysis using less energy which would make the water-powered car viable.

Using Water-Powered Cars in the Past and Now

There have been several carmakers who have attempted to make the water-powered cars work over the years. The most recent attempt was made by nanoflow cell AG, a Swiss-French company who unveiled a water-powered car line in 2015. The company is still running even though they have faced much negative criticism and skepticism. The cars produced by nanoflow cell AG don’t burn HHO gas, they run on a flow system that uses electrolysis to power a fuel cell. The car is still considered water-powered, although it is different from the initial designs of Meyer.

The problem with water-powered cars isn’t with using hydrogen to power the vehicle, the problem remains in how to attain this from water, in the car, while not having to expend huge amounts of energy in electrolysis. Cars can actually run perfectly fine on hydrogen in place of gasoline! Some future developments are focused on storing surpluses of energy produced from renewable sources such as hydrogen, by using the unused energy to power electrolysis and using this hydrogen to power vehicles.

The future for water-powered cars is uncertain, there still needs to be a revolutionary step forward in their design in order to make them truly clean and viable for widespread adoption. It’s been many years since the technology was first considered, but we have yet to see any car manufacturer come close.

Hydrogen-powered vehicles, on the other hand, may offer a way to power our cars with clean energy in the future. Whilst some big industry players remain skeptical, Elon Musk, for example, famously opposes the idea that they will disrupt the automobile industry, claiming that “success is simply not possible”, others back hydrogen fuel cell technology, with some studies revealing that they outperform battery-powered electric vehicles.

Fuel cell electric cars are powered by the most abundant element in the universe: hydrogen. Although a fuel cell car runs on electricity, it does so differently than battery-powered or plug-in hybrid cars. In a fuel cell, hydrogen reacts electrochemically to produce electricity to power the car.