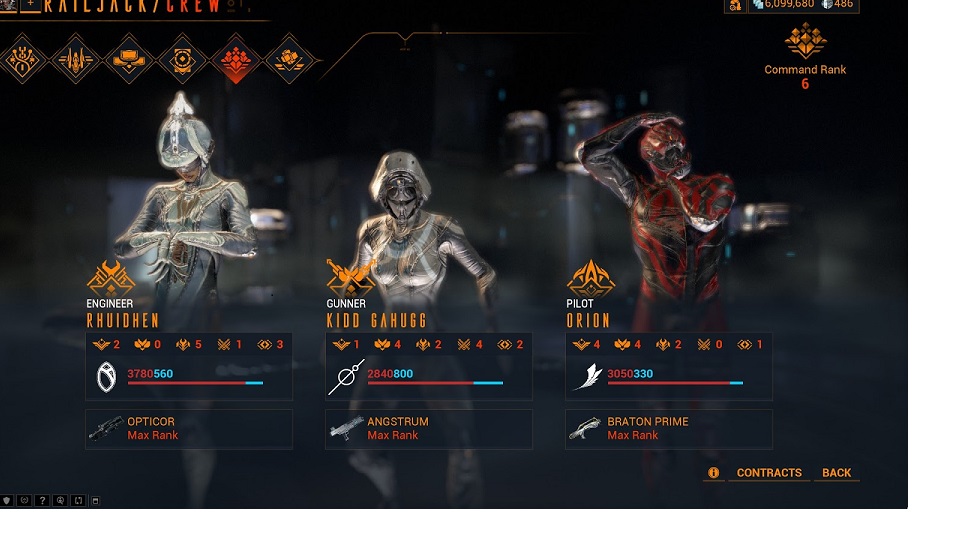 Warframe’s Railjacks were an ambitious feature that didn’t quite hit the mark when it first came out. Fortunately, Warframe’s developer Digital Extremes has tweaked and added features to get the game mode to become better. One of these features was the addition of AI-controlled Railjack crew members. These crew members pretty much do anything a player can except leaving the Railjack. This feature comes in really handy for when your friends don’t want to join you for another jaunt through the void.

Naturally, you might be asking “where are these new minions?” and “can I buy them?” and you might be wondering how to make the best use out of these new fleshbags. Don’t worry, just keep reading and you’ll have everything you need to head out into space battles without needing any friends.

How to get Crew members

Your need a couple of things before you can hire your crew. First, you’ll need at least one point in the Command Intrinsic, a Railjack-specific skill tree that specifically relates to commanding crew members. The very first level gets you a slot that you can put for the first crew member in. Subsequent upgrades give you the slots needed to have a full crew of three crew members if you’re playing completely solo.

Once you have that, you’ll need to head to Fortuna, the Corpus-themed open world hub located on Venus. You’ll need to speak with the Ticker, the Solaris who lets you pay off debts owed by Fortuna’s many denizens. She’ll allow you to hire crew members either for credits or for crafting ingredients.

A Crew member’s hiring costs are affected by your relationship with the Syndicates associated with them. Crew members can have their costs increased by up to double their base cost if their Syndicate has terrible relations with you. Conversely, if you’ve reached the highest rank available, costs can be cut down by up to half. Naturally, this leads to your Crew being composed of factions that you’ve invested much time in, represented by their jumpsuit colours and dialogue which gives some depth to the world.

It’s also possible to use Kuva Liches as your crew members. These are much harder to get on your ship as you’ll need to go through the song-and-dance of figuring out their weaknesses and successfully executing one. If you chose to spare it, you’ll gain the option to bring them aboard once you get the Command Intrinsic to Rank 8. It is, however, only possible to assign them to the defender role which makes them less versatile than a normal crew member.

How to shop for your Railjack Crew members

Assuming that you’re starting at the Ticker and the fantastic array of people you can buy from her, it’s time to decide which one works best for you. Each Crew member has five main stats:

Crew members will have randomly-assigned points in each stat that essentially give them a specialisation. Simply finding those that fit your needs should be easy enough.

They also have different health and shield values which will help with scaling endurance and simply making them better at defending the Railjack.

What to do with them

Each crew member can be assigned to one of four roles:

There are, however, some limitations with the way crew members work. Pilots, for example, can’t be told which way to point the ship, making it difficult to aim the Railjack sling or main gun. They don’t seem to do much while the pilot station is in use which necessitates extra micromanagement. Engineers aren’t as fast at repairing as players and can’t use the forges at the back of the ship which will force you to head to the back to make more ammo for the various weapons.

But what about Railjack Crews in general?
Overall, it’s a great system. For all of their limitations, these crew members can be directly controlled by the host which makes them a hell of a lot more useful than some players. After all, they can’t shoot themselves out of the Railjack and leave the poor pilot to get gunned down by boarders while trying to fix a hull breach. They aren’t that expensive either.