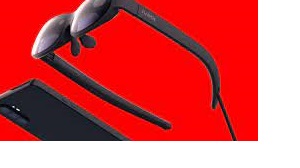 Augmented reality glasses maker Nreal is now officially selling the ‘Light’ glasses in the US, but only through Verizon Wireless. From the time of the Nreal Light’s release, they haven’t been officially available to buy through US retailers. You could still technically get a hold of them elsewhere. Perhaps through resellers on eBay or through a retailer that ships internationally to the US.

Now though you can walk right into a Verizon store and buy a pair of Nreal Light glasses off the shelf. Provided your local store would have any in stock.

The Nreal Light glasses, for those unfamiliar, allow you to display content in augmented reality. Essentially mimicking a large screen onto whatever surface the glasses are projecting towards. Here’s a use case for you. Laying down in bed and watching Netflix. Comfortably. While you would normally be staring at the ceiling.

According to Nreal, a number of stores across 9 states will be getting them. This includes Virginia, Georgia, New Jersey, New York, California, Washington DC, Massachusetts, Illinois, and Texas.

Additionally, there’s only a few stores in each state that are included. While Virginia will only sell them in one location. There’s good news though for anyone who doesn’t live near one of those stores. You can buy them through Verizon’s website as well.

The glasses retail for $599 and have limited phone compatibility
If you’re looking to snag a pair, check to see if your local store has any, or head to Verizon’s website to purchase there. But be forewarned that they only work with a very small number of phones.

All that being said, the glasses are not officially on sale just yet. They won’t hit local stores until November 30. And they won’t be available through the Verizon website until December 2.